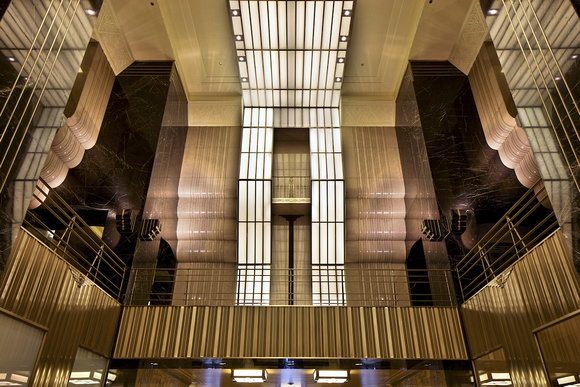 This gallery displays examples of art deco architecture and styling in Chicago.

Located prominently at the end of LaSalle Street, the Chicago Board of Trade is one of the finest Art Deco buildings in Chicago. Built in 1929 and designed by Holabird and Root, the building features a limestone exterior with typical deco setbacks and carved stone ornament. At the top of the 42-story tower is a pyramidal metal roof topped by an aluminum statue of Ceres, the Roman Goddess of agriculture. The interior features a series of dramatic lobbies with six varieties of marble, nickel silver metal trim and ornamental plaster. The main lobby is a three-story arcaded space with nickel silver storefronts, balconies, marble piers and walls and a luminous ceiling. All of the lobbies were illuminated by stylized fixtures with nickel silver frames and translucent glass. Due to its significance for architecture and its association with trading, the building is a National Historic Landmark and a City of Chicago Landmark. Renovation was carried out in 2004 by Harboe Architects.

The Field Building (also known as LaSalle National Bank Building and Bank of America Building) at 135 South LaSalle Street is another art deco office building at in the Loop community area of Chicago, Illinois in the United States. The construction of the Field Building was completed 1934 as a 535 feet (163 m) 45-story skyscraper on the site bounded by South Clark Street, South LaSalle Street and West Adams Street. The architect was the firm of Graham, Anderson, Probst & White. It was the last major office building in Chicago prior to the cessation of construction in the Depression and into the war.

The building rises from a four-story base that covers the entire site. The exterior of the first story is faced in polished black granite. Windows are framed with polished aluminum or monel metal and have black and polished aluminum spandrel panels. The entrances on the east and west facades rise the entire height of the base and are also framed in black granite. Five pilasters faced in white Yule marble separate the bays containing revolving doors that provide access to the lobby. The upper stories are sheathed in limestone with windows grouped vertically and recessed to emphasize the building’s height. The 45-story rectangular tower is centered on the base and buttressed by a shorter 22-story tower at each of its four corners. Many of the latest innovations such as high-speed elevators and air conditioning were incorporated into the building’s design. The lobby features a multi-level arcade between LaSalle and Clark Streets allowing pedestrians to walk between the two streets and access the retail space without exiting the building. The elevator indicator panel and mailbox in the lobby are in an integrated design which resembles the building’s exterior shape.

The Carbide & Carbon Building is at 230 N. Michigan Avenue. The building, built in 1929 and designed in art deco style by Daniel and Hubert Burnham, sons of architect Daniel Burnham, was designated a Chicago Landmark on May 9, 1996. The building has 37 floors and is 503 feet (153 m) tall. The exterior of the building is covered in polished black granite, and the tower is dark green terra cotta with gold leaf accents. The use of stylized representations of leaves on the building's exterior was an intentional reference by the architects to the prehistoric origins of subterranean carbon deposits in the decay of ancient plants.
The ground floor was originally designed to display products of the Union Carbide and Carbon Corporation's subsidiaries whose offices were in the building. The lobby features art deco bronzework and black Belgian Marble.
(c) Alan Ainsworth Photography
User Agreement
Cancel
Continue