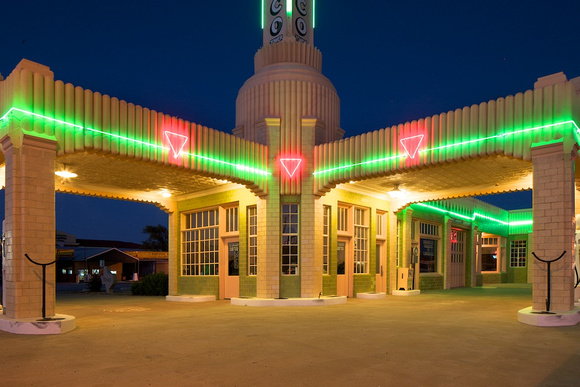 This unusual building was one of many commercial structures built during the early 1930s along the new US Route 66. When it became clear that the newly established Route 66 would cut through the north end of Shamrock, the owners of the prime corner lot at the new crossroads of the Del Rio Canadian Road and Route-66 agreed to sell the land and in return have a custom designed building constructed on the site for their own use. The Tower Conoco was designed by Pamper architect J.C. Berry and built by local entrepreneur J.M. Tindall in 1936. It is one of the best examples of a 1930s gas station/diner and shows many art deco influences particularly in the geometric detailing, glazed ceramic wall tiles, curves and neon lighting.
The original building combined the Tower Conoco gas Station, the U-Drop Inn Cafe and a retail store, never used as such but soon used as a ballroom and overflow dining room. The building fell into decline and reached its nadir in the 70s when it wa s painted red-white-and-blue and converted to a FINA station, finally closing completely in the mid 1990s. The Shamrock Chamber of Commerce has now restored the building and the cafe is to be reopened.
(c) ALAN AINSWORTH PHOTOGRAPHY (2012)
User Agreement
Cancel
Continue