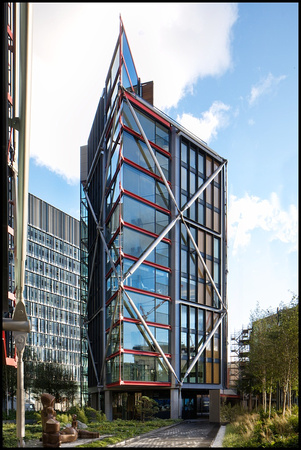 The diagonal structural bracing is external so that the internal floorplates are flexible; as a result massive pieces of engineered steel are placed across apartment windows. RSH+P has established a diagonal walkway grid reinforcing the existing roads and giving form to the footprint of the pavilion structures. By spreading accommodation across five buildings and moving the blocks east new views towards the Tate are opened up from the south. A new strip of soft landscaping will also be developed, running north-south alongside the almshouses.

Neo Bankside embodies the kind of remaking of London as a civilised public spaces surrounded by beautiful buildings which Rogers has advocated for some time. Neo Bankside seems consistent with his vision: brownfield, dense, permeable, mixed use, near to the riverfront and transport hubs and built to high standards.
ALAN AINSWORTH PHOTOGRAPHY (2012)
User Agreement
Cancel
Continue